A major challenge in verifying the anecdotes related by Herbert Asbury in The Gangs of New York consists of not only identifying his source material and the embellishments he made to those sources, but also the validity of that source material itself. In many cases, Asbury’s sources were books written by professional newspapermen who–like Asbury himself–was relating barely-remembered names and events that took place decades earlier. Moreover, like Asbury, the writers of his source material had their own source material, rather than direct knowledge of what they wrote, and little access to documentary evidence.

Today, we take for granted the access provided by digitized newspapers, census records, court cases, etc; and before those existed, libraries and government entities provided microfilm documentation, while newspapers and libraries maintained clipping morgues, sorted by names, events, and subjects. Asbury’s sources, who wrote in the 1870s, 1880s, and 1890s, had no such resources to call upon, other than bound copies of newspaper issues collected by libraries–the mining of which requires time and patience. Instead, Asbury’s sources relied on human memory and a very small selection of saved newspaper articles. People living in the nineteenth century had a very different perception of their recent past, because it receded so quickly.

Nowhere is this more obvious than when we delve into the facts behind the river pirates Bill Lowrie, Cow-Legged Sam McCarthy, and the saloon named The Rising States. There are fragmentary facts that suggest all existed, but the clues are so minimal and contradictory that it is hard to assess whether their notoriety was deserved. First, let’s summarize what Asbury related about these three in Chapter IV, Section 1:

The Rising States was in existence years before any of the river pirates came to public attention. It served as a sailor’s hotel at the corner of Water and Oliver Streets at least as early as 1848, and was still being cited as a “den of infamy” in 1865. However, there is no documentation that connects either a Lowry/Lowery/Lourie/Lowrie, etc. or a McCarthy with a saloon at this address, although a 1859 article does indicate that Cow-Legged Sam’s father ran a “low den” on Water Street–but doesn’t specify the address (there were many “low dens” along Water Street).

Cow-Legged Sam (a nickname referring to a clubfoot deformity) was a Fourth Ward tough, said to weigh 200 pounds in an age when that was behemoth, who made news for just a brief period, in 1858-1859. He was arrested for stealing money from a black sailor; and for passing counterfeit money on vendors in the city’s James Wood park. Two papers indicated his real name was Patrick McCarthy, but he used the alias “Sam Kirk,” and was called Cow-Legged Sam by others. More details about Sam, his family and his fate, are lacking.

The real puzzle is “Bill Lowrie,” the name that Asbury lifted, like his allusion to Charley Monell, from Charles Sutton’s The New York Tombs, Its Secrets and Mysteries, published in 1874. Sutton was quoting a Brooklyn Eagle article, “River Thieves,” published in January of that year (and later, in 1882, as a chapter of the National Police Gazette‘s serialized book, Crooked Life in New York). [“Bill Lowrie” also appears on Frank Moss’s American Metropolis, published in 1890, but adding nothing beyond what had been mentioned in 1874 in the Brooklyn Eagle.] So all references to a “Bill Lowrie” can be traced to one newspaper article from January 1874…which was wrong.

A thorough scour of 1850 – 1880 newspaper archives, the flash press, books, and prison records finds no William or Bill Lowry/Lowrie/Lawry/Lourie/etc., etc.

Two years earlier than the Eagle article, in 1872, Edward Crapsey published The Nether Side of New York, in which he devoted attention to famous river pirates:

“Among the first-class river thieves whose methods and dangers have been told, there are some who stand out in bold relief from their fellows as desperate and successful outlaws. James Lowry and Tom Geigan, two of this class, are relics of the Saul and Howlett gang, to which they belonged as “kids,” being then mere boys not more than ten years of age, but already noted for aptitude in crime. During the seventeen years which have elapsed since that terrible epoch they have been constantly engaged in harbor depredations whenever at liberty.

“Both have often been arrested; both have been subjected to several brief terms of imprisonment and have returned, to be again, as they have been all these years, the terrors of the East river. During their long careers they have stolen property to the value of hundreds of thousands of dollars; yet they have always lived on scanty allowance, and, it is said, are as poor now as when they served
Saul and Howlett by crawling into cabin windows. Both are men of extraordinary physical powers, which are yet unimpaired, notwithstanding their years of exposure, during which they have scarcely been visited by the rheumatism, which is the common and most terrible foe of all their tribe, as it cripples and drives out of the vocation more river thieves by seventy times seven than the law ever did or ever can. Both are men who have made thievery an art, and have practiced it with supreme indifference to everything but their own safety and profit.”

Moreover, a year before Crapsey, the New York Tribune called out James Lowrie as a river pirate: 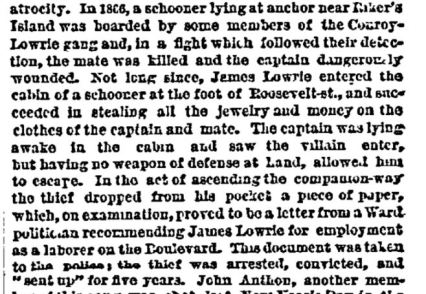 So it appears that the mystery is solved: that “Bill Lowrie” was really “James Lowrie.”

But not so fast–just as was the case with Bill Lowrie, aside from these two mentions, a thorough scour of 1850 – 1880 newspaper archives, the flash press, books, and prison records finds no river thief named James Lowry/Lowrie/Lawry/Lourie/etc., etc.

But there are multiple citations involving a notorious river pirate named John Lourey/Lowrie. In March of 1876, the New York Times reported the arrest of “noted river pirate” John Lowery. He was sent to Sing Sing as John Lourey, 39, a machinist and resident with wife Mary of 16 Batavia Street (a now-vanished street in the Lower East Side a half block from Cherry and Roosevelt Streets).  His sentence was fifteen years, indicating it was not his first offense.

Bill, James, or John? All have newspaper citations, but only one has a Sing Sing record: John.

3 thoughts on “Bill Lowrie, Cow-Legged Sam, and The Rising States”